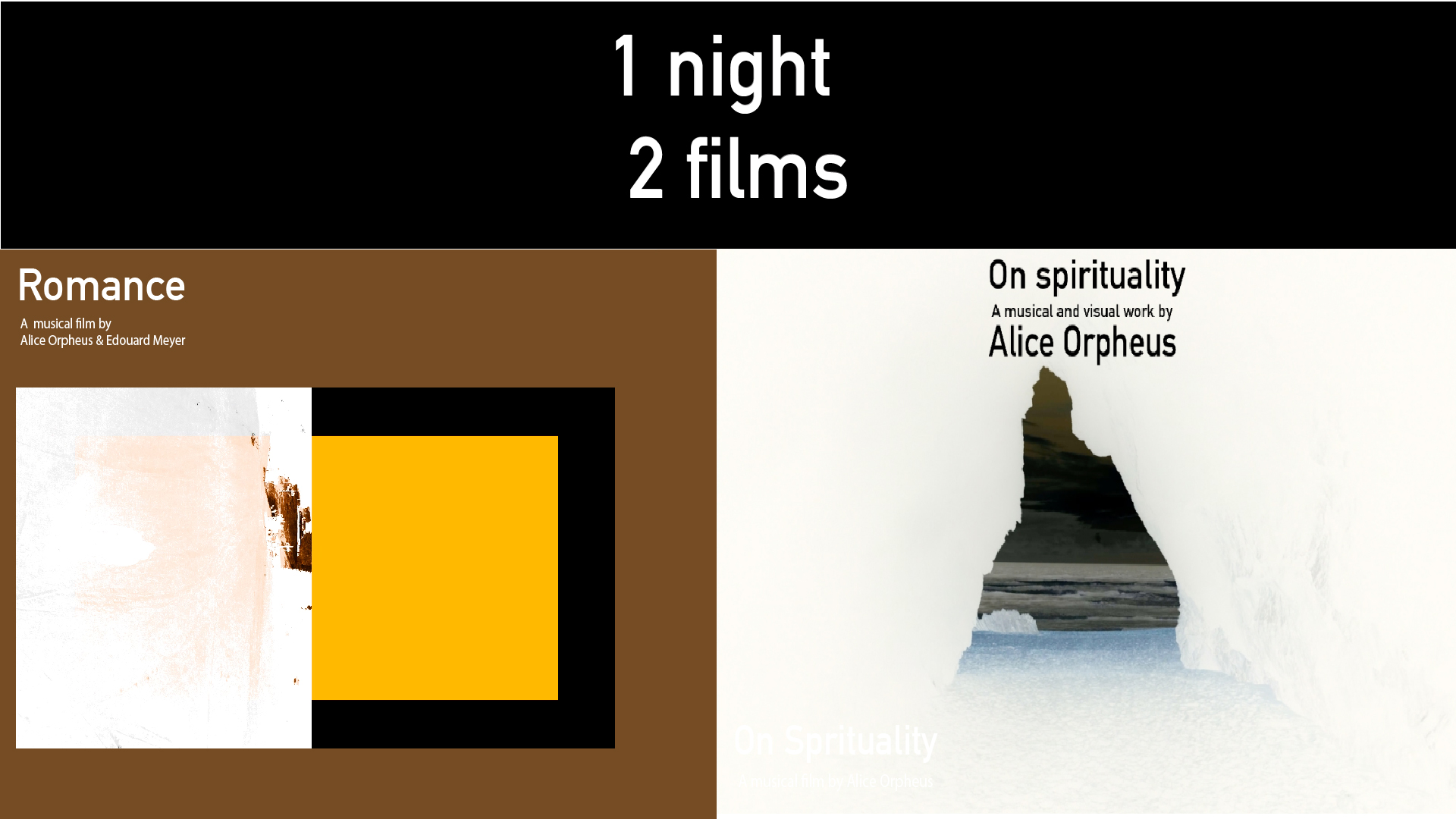 As a composer, Alice Orpheus has been looking for ways to find a balance between his own writing requirements and a clear emotional narrative that will accompany the listener all the way through the piece. The creative way to accompany his musical intention with motion picture has been playing a counterpoint line in what Alice Orpheus offers on stage.  For all those reason, Alice has been focussing on this form of live performance Piano + recorded tape + Film

As a full night of performance Alice Orpheus offers 2 different projects : Romance and On spirituality

Obviously those 2 performances can be sold individually.

It is a snowy and white landscape made out of hills, valleys and mountains. You can hear a thick silence when the cold a threatening wind doesn’t blow. It looks like nothing moves, not even time for most of the day. Everything is dramatic here. A man walks. He’s alone and he’s been alone for a while. He’s making his way back to what seems to be home for now, a cabin hidden in the depth of the valley.

He’s been in big cities of the occidental world, on the beaches of the Pacific Ocean, under the sun of the Aegean Sea, but all this is all so far behind. The world has changed, many are dead. A few men and women have survived, scattered in a world where everyone travel by its own means. Drones still hostility fly over cities and country sides.

Romance is a double love letter to a world that is no more and a lover that is gone. Multimedia project for solo piano and electronic tape shaped in the crossroad of  drone electronica, contemporary classical and a tonal world, Romance looks for the balance between silence and music.

Romance is also the solitary walk in the snowing landscape, symbol of a dying world.

In between abstract rhythms and tonal harmony, Alice Orpheus draws his unspeakable love for introspective music, flirting with the ghosts of Keith Jarret, Morton Feldman and Aphex Twin.

Commissioned  by the Superspective contemporary music festival (Lyon) , On spirituality is a multimedia (film and music) piece by composer Alice Orpheus asking himself a simple question : “How to believe in a contemporary world ?”

Following an 8 cells structure where melody acts as guide through the piece, On spirituality is also a mouvement through different arrangements, from strring to oboe, clarinet, synth textural compositions and spoken words. For this piece Alice went to interview people who would defined themselves as “christians” talking about their faith. Some of their answers can be heard throughout the piece.

On Spirituality from Ao on Vimeo.